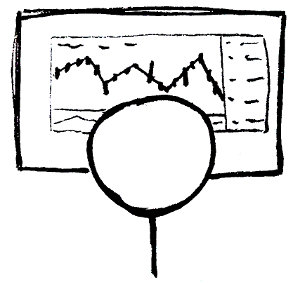 I just discovered a video by The Chartist, Nick Radge. Well worth a watch.

He starts by distinguishing between quantitative and qualitative trading – the former can be learnt; the latter evolves with experience.

I won’t bore you by describing the whole video. Below are some thoughts I picked up. They’ll become clearer when you watch the video.

Focus on the process, not the money.

There is nothing worse than not being able to pull the trigger.

You can’t control it. So there’s no point watching it.

The only thing you can control, is how much you are willing to lose.

The 2% textbook rule is not for everybody. Your risk tolerance defines the limit. As a guideline, think of the maximum amount of money you’re ready to lose and then half it. You should never get to the point where the pain is too much.

The more you risk, the more volatile is your account.

One shot is not gonna win the whole tournament, but one shot can lose it.

The markets don’t change. The only change is change itself.

At about 15 min there is a formula to calculate how many losing trades in a row a system is likely to produce depending on its success rate and the number of total trades. He also shows a table every so often throughout the remainder of the talk with the results of this formula for increasing success rates.