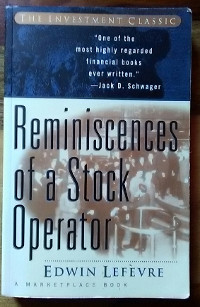 This book was mentioned by a few of the interviewees on Chat with Traders. Eventually, I decided to get a hold of it and see what the fuss is all about. I snapped up second hand copy – probably the best investment of 4 GBP since long!

Reminiscences of a Stock Operator by Edwin Lefèvre was first published in 1923, but seems to provide timeless insights into the workings of the stock market. It is written as if it was an autobiography recollecting the experiences of a stock trader who the author calls Larry Livingstone. Apparently, it is based on the famous trader Jesse Livermore.

Quite a few of the lessons Livingstone learns along his trading career are also talked about in the CWT interviews. It is quite remarkable how human behaviour in the stock market world doesn’t really change over time. The way this book tells these lessons made them very accessible to me. Even though they were basically repeated knowledge, I felt more compelled to listen. It might be the style of the book or just the right moment in my trading journey.

I also gained some basic background insights. Sure, some practices the book talks about are probably outdated now; if so, they have most likely been replaced with new tricks of similar effect.

This is definitely a book I will read again. I think it’s the kind of book that has you discover new insights with every read.

Here are some of the book’s main points

One Reply to “Reminiscences of a Stock Operator – review”