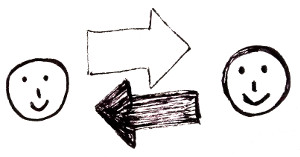 Recently I noticed somebody ask on social media whether other traders felt guilty when they won money in a trade because it means that somebody else has lost money. My first thought was…

Being in a trade is not the time to be altruistic. It’s cold-blooded decision-making to end green. At least it should be. You’re in the game to make money. Sure, once you’ve made money you might use it for a good cause. But that’s a totally separate situation and mindset.

That question stuck in my head though. In essence, it has quite a short-sighted or even arrogant view at its base. Granted, maybe not intentionally so.

The question assumes that you have outsmarted the other one who bought your shares (or sold you some) because you walk away with a gain that they didn’t get. But who says they have made a loss? How do you know their strategy? Maybe their method complements yours. Maybe their speciality is to get in at the bottom of a swing and out at the first pullback, whilst your approach is to get in at the first pullback and out at the next high. Maybe they have hit their profit target and are happy with it. You simply cannot know. So, why spoil your win by worrying about an issue that might not even exist?